The UK could drive up a budget deficit of £36 billion by 2021-22, according to a recent report from the Institute for Fiscal Studies. The revelation is likely to have an impact on the upcoming Autumn Budget, and subsequently, small businesses.


Earlier this year, Britain’s Finance Secretary, Philip Hammond, set the bold target of eradicating the country’s budget deficit by 2025. However, weak productivity has halted growth and made any such targets unrealistic.

Instead, the budget deficit is likely to increase significantly if the Office for Budget Responsibility (OBR) cuts its prediction for annual productivity growth of 1.6%, following poor economic performance.

The projected deficit could total as much as £70 billion if the OBR decides the productivity growth is closer to the 0.4% recorded over the past seven years.


Additionally, the lack of clarity over the nature and impact of the UK’s withdrawal from the EU has cast considerable doubt over these forecasts.


At the time of the Spring Budget 2017, national income per adult was around 15% lower than it would have been had output per adult instead grown by 2% a year (close to the post-war average) since the start of 2008.


Despite this historically poor performance, weak growth was expected to continue. The Spring Budget forecast implied that, by 2022, national income per capita would be 18% lower than it would have been output had grown by 2% per year since 2008.

As an accounting firm who specialise in working with small businesses, Accounts and Legal understand the need to ensure that the advice and support we provide is relevant and reliable for our clients.


If the Chancellor is to stay true to his fiscal goals, it is likely that he will increase tax rates, rather than borrowing at, what are currently, quite low interest rates.

The Chancellor has been dealt a "very tricky hand indeed", says the IFS report.

"Does he allow higher borrowing to persist, does he add to that with more spending, or does he try to offset that with greater taxes?" said IFS deputy director Carl Emmerson.

"Public sector workers, the NHS, the prison service, schools and working-age benefit recipients, among others, would like more money.

"Given all the current pressures and uncertainties, and the policy action that these might require, it is perhaps time to admit that a firm commitment to running a budget surplus from the mid-2020s onwards is no longer sensible."

History would suggest that tax increases can be expected, as the IFS report shows chancellors tend to hit the public with hikes shortly after general elections. As this budget is the first since the latest general election, the signs appear ominous.

When compiled, the long-run net tax rises announced in the year following general elections are quite staggering. 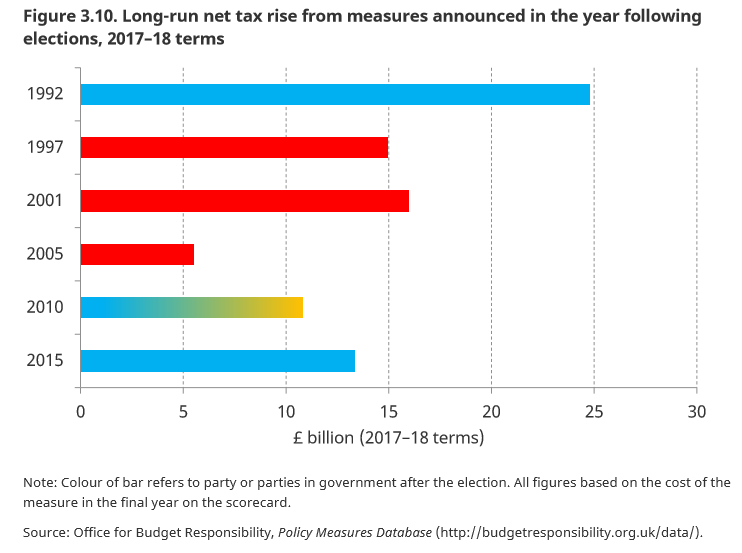 One particular tax which may be hiked is the Class 4 National Insurance Contributions for those who are deemed self-employed.

In the Spring Budget this tax was initially increased, however, after much appeal, this action was reversed. This change would have applied only to those generating profit greater than £16,250.

One thinks that should taxes be raised in the Autumn Budget, these contributions may be one of the first to suffer.


Be prepared for the Autumn Budget by requesting an accountancy solution, specifically tailored to meet the needs of you small business. Get an Instant Quote today and one of our Business Development experts will be in touch shortly.


The Autumn Budget is due to be delivered by Chancellor Philip Hammond on Wednesday, November 22nd.